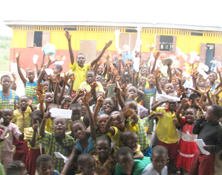 Adam‘s off to Ghana this weekend for two weeks, working once again with the excellent development agency AJWS alongside community organization Challenging Heights in the Sankor neighborhood in the city of Winneba.

Meanwhile, Wild Fires’ drummer and engineer Bronson Tew will be mixing the new record back in Athens. We’re pleased to be teaming up with Pledge Music to offer you an opportunity to pre-order the CD and get some great rewards. More info on that soon..