Fresh off a heck of a weekend at the Folk Alliance conference in Memphis, Adam‘s off to Nicaragua for one week, followed by a 40 Watt show in Athens opening for JOSH RITTER & JOE PUG, and a mid-March to April Europe tour in Netherlands and UK.

Tickets are selling for the Josh Ritter show- make sure to buy in advance ($17 adv, $20 at door) via Athensmusic.net or at Schoolkids Records in Athens for $15. And come support the hometown boy- we’re thrilled to be opening the night. Doors at 8pm, music begins promptly at 8:40pm (for real). You might get a cool Nica story or two.. 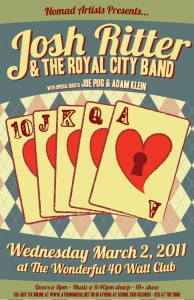